“Chief Minister Prem Singh Goley is the biggest liar of all and fellow liars will become the spreader of his lies” said the former Chief Minister and SDF party president Pawan Chamling in his statement.

He accused the SKM government of redefining Sikkim politics by making lies and conspiracy mandatory to win elections and said that the party has proven that lies always triumph. Chamling warned that the lies the SKM party were spreading will have adverse impacts on Sikkim and if the SKM government doesn’t repent of their deceptive ways and lying, Sikkim will be full of liars, swindlers, cheats and deceivers.

“This government was inaugurated with their famous liar mantra – ‘Tyo Malai Thaha Bhayena’” and “they had made a mockery of the Sikkim Legislative Assembly on the very first day their government entered the house by using hired goons to heckle me right inside the House and two minutes later the great liar CM said to the media, ‘Tyo Malai Thaha Bhayena’. Can there be a bigger liar in the whole universe than him?” questioned the former Chief Minister.

“This government was formed by telling lies, inaugurated with lies and is running on lies” he added.

Chamling accused that the lies and liars were ruling the roost in Sikkim these days and the biggest liar was leading the state and said that the biggest liar’s team was threatening those who question those lies.
“The hundreds of lies in their election manifesto and speeches have begun to come back to hound them, but these shameless SKM leaders are not ready to even be reminded of their tall promises, let alone to go about fulfilling them, their own lies have become irritants for them” said Chamling in his statement.

Chamling said that SKM party had set the following new trends. Lies can be used as the biggest political agenda to win elections. Any lie can be spoken to deceive innocent people.

Lies can be guarded with stone pelting, threatening, press conferences and bribing those who are willing to take a bribe.
The biggest liar is the most eligible person to be the Chief Minister. The Chief Minister has to have a team to conspire, intimidate and bully innocent people and take undue advantage of their vulnerability.

“But let them know that their lies are having long term adverse impacts on Sikkim and it’s culture, they are establishing a culture of selling lies and deception and the level of trust has gone down” and “Being a liar is now equated with being smart”

He also accused the SKM party of popularizing new ideas such as “As long as you can utilize lies to succeed, you can speak lies”, “Lies can triumph”, “Liars can make great leaders”, “Press Conferences are the art of speaking lies to journalists”, “We can speak lies as much as we want to but we must have the courage to face the people without feeling ashamed”.

“Sikkim is losing its image as a land of truthful and peace-loving people” and if this liar government doesn’t repent of their gross lies and false promises, lies will be justified and glorified in Sikkim” said Chamling.

“The day is not far when our streets, villages and towns will be filled with liars swindling, cheating and deceiving each other.” He said that “The lies must be removed from the top.”

Furthermore Chamling also accused PS Tamang, Chief Minister to be a lier in which he said “ When the Chief Minister himself is the smartest liar, imagine the condition of the rest” 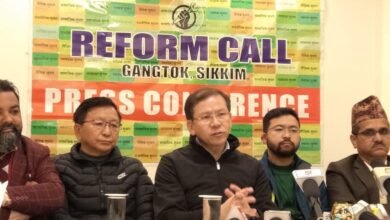