The observation organized at MG Marg by Sikkim Nagrik Samaj (SNS) had the attendance of Prince Jigme Wangchuk, one of the rare occasions when he made his presence publicly. Along with the Prince, Sikkim football icon turned politician Bhaichung Bhutia were in attendance with SNS chief patron Tseten Tashi, President Bharat Basnett, and general secretary Passang Gyali Sherpa. SNS highlighted how their extended invitation to Governor Ganga Prasad to the Golden Jubilee observation, marked no presence from the Governor.

SNS on the occasion stressed on their past demand for Inducting Article 371F and 8th May Tripartite Agreement in school curriculum in Sikkim and to form committee consisting of all political parties, government of India and social organizations for political, economical and social issues pertaining to Sikkim. They passed resolutions for both the demands at the event.

SNS chief patron Tseten Tashi asserted on the ‘special provision’ of Article 371F while highlighting the importance of the Tripartite Agreement. He stated, ” Sikkim still enjoys International personality under international law but under shared sovereignty, this has been the observation of the Supreme Court of India. If Article 371F is challenged, Sikkim will no longer be part of India. It has been treaties (1950) and agreements (8th May) that define Article 371F. But those working for the protection of these laws and treaties are tagged as communal in our own state. We appeal to the State government to find loopholes which are diluting our precious special provisions, including a threat to our income tax exemption currently with the Billions of Dollars worth scam involving the Multi Commodity Exchange. The government must rectify many such loopholes”.

SNS President Bharat Basnett came down heavily on the Sikkim Police terming them as ‘Dadagiri’ while naming senior police officers in the Department. He took the reference of recent gunfire incident in Soreng district. He stated, “Our leaders are scared for their personal benefit, they are ignoring the rights of Sikkimese people. Today being Mother’s Day, we must pledge to protect Sikkim taking her as a mother. No one in Sikkim is against India, when has Sikkim spoken or acted against India? There are series of examples of such activities happening in the rest of the country. Yet they doubt Sikkimese people”.

Basnett went on to urge Sikkimese youth to be ‘as devoted to Sikkim as they are to SKM or SDF’, taking a jibe on the recent violence, he stated, “No one will hurt you when you are that devoted to Sikkim. It has been the works of the Chogyal Palden Thendup and his devotion to implementing Article 371F that has safeguarded us all these 50 years. He didn’t agree to ‘Instrument of Accession’, otherwise we would have faced abrogation similar to Article 370 as in case of Jammu And Kashmir. We became a State from being a country, Meghalaya became a State from being a district of Assam, they have secured the ILP but we are unable to do so despite the Article 371F’s special provision”.

On the occasion, SNS general secretary Passang Sherpa also addressed wherein he spoke about the MCX fraud among many other issues. He spoke elaborately on the Registration of Companies Act 1961 and how it must be protected. 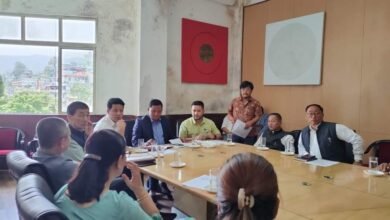