On the occasion of the birth anniversary of the father of the nation Mahatma Gandhi, on October 2, 2021  Chief Minister of the state Prem Singh Tamang  made a verbal announcement that the state government will  ban single use packaged plastic water bottles starting  January 1, 2022.

Addressing the media Tamang  said that there will be a ‘complete ban on retail and usage of such products’ and added that the decision was made keeping in mind the environmental concerns of the state. Sikkim being the Himalayan state is blessed with natural resources which provides fresh, good and quality drinking water and hence the decision.

In context to the ban of packaged water bottle on  December 29, 2021  state government issued   notification which put  ban  on  use, manufacture, import and sale of plastic water bottles.

“Now, therefore, in excise of the powers under section 5 of the Environment (Protection) Act, 1986 (Act 29 of 1986) delegated to the State Government vide Notification No. S. O. 152 (E) DATED 10th February 1988 read with rule 4 of the Environment (Protection) Rules, 1986, the state government hereby imposes ban on use, manufacture, import and sale of plastic water bottles of capacity 2 litres and below w.e.f. 1st January 2022 in the state of Sikkim. This is in supersession of Notification No.25/Home/2016 dated 19/05/2016.” Reads the notification

It was way back on June 4  1998 when the then former SDF Government  had banned single use disposable plastic bags from usage with the legislation which  stated that “You shall not deliver any goods or materials purchased or otherwise to any person, firm, shop, company or any other agency or organization in plastic wrappers or plastic bags” and was the first state in the country to do so.

And in 2016 the state also made two important decisions. First to ban the use of packaged drinking water in government offices and government events, second to ban the use of Styrofoam and Thermos (polystyrene) disposable plates and cutlery in the entire state. And now from  of  January 1, 2022 there will be complete ban on the usage of packaged plastic single use water bottles in the entire state.

Packaged single use plastic water bottles had been a matter of major concern for the small Himalayan state like Sikkim for many years now. One of the major industries of Sikkim ‘tourism’ brings tourists which are about three folds of its own population and the waste generated is alarmingly high. According to the report, out of total waste generation in Sikkim, 17.18 percentage of the waste generated is plastic. Now, since the data of the plastic waste generated being recycled is unavailable, but it is most certain that the large portions of it gets dumped in the landfills of the state or gets washed away through rivers and drains, which is causing environmental havoc in the hilly state of Sikkim.

When plastic was invented, it was seen as a revolutionary invention. But since many decades it is seen as concerning material which has been threatening not only our environments, ecosystems and marine lives but our very existence as humans.

But why has plastic water bottles become so bad for the environment?

The first and the obvious reason is that they are not biodegradable and could take thousands of years to decompose, which means that the plastics which has ever been made still exists in one form or another and which with time break down into microplastics. Microplastics remain in the earth forever, releasing toxic chemicals into the environment.

Plastic water bottles are made from polyethylene terephthalate (PET) which is a petroleum product and takes massive amount of fossil fuels to produce it along with transporting the product manufactured. The amount of water used for the manufacture of water bottles is also higher than the amount it can be filled in it. Therefore, it can be viewed as waste of already depleting reserves of resources.

Only a small fraction of these water bottles get recycled and the rest ends up in landfills and the majority of these get washed down into the oceans where it causes serious trouble to the marine lives.

The marine animals many of the times mistakes them for food, choking them while consuming or die from the toxic chemicals released by the bottles in their stomachs.

There is a major misconception that water from the packaged water bottles is much cleaner and pure than any other water. But it turns out that the packaged water may just be a glorified tap water. Instead, the bottle of water may contain microplastics released by the bottle, and consuming it may result in serious illness in the long run. Studies done by various organizations have also found traces of harmful toxic chemicals such as phthalates, moulds, microbes, arsenic, and other contaminations. In fact, a World Health Organization (WHO) study has revealed that 93% of different brands were selling water with plastic fibres in it.

There is again a notion which says that the plastic water bottles can be reused but in fact reusing such water bottles could harm you more as the bottles start releasing more toxic chemicals and microplastics with the passage of time.  Medical researchers suggest that consuming microplastics over an extended period of time may pose long term effect to your health and increase the risk of illness. There are studies that also suggest that drinking packaged water in a long run is believed to be a cause of or in the majority of cases increase the risk of cancer, as there are growing concerns that packaged water bottles may contain carcinogens and microbial contaminants.

Such bottles are used in marriages, hotels, restaurants, private parties, funerals, events, picnics, etc. and huge amount of garbage is produced.  Some of them end up in landfills, but a large quantity of it is dumped in rivers or thrown away in the open. With small geographical area Sikkim finds it difficult to depose them in landfills without clearing more lands and the bottles thrown away has already been disturbing the natural ecosystem and the environment both land and water.

Due to the hilly terrain of the state the rainwater requires a path to flow down and in urban areas like Gangtok, drains are dug up to let the flow of water. But due to blockage of the drains by the thrown away garbage, which includes those discarded single uses plastic water bottles, it causes havoc in the urban settlements.

There may be a scope of recycling the bottles to manufacture other products but since the state has a very low budget as compared to other larger states therefore it becomes increasingly difficult to acquire technologies and manpower to recycle such large amount of discarded water bottles.

However, it seems banning ‘just’ the water bottles will not solve the issue, due to existence of other products manufactured by large multinational companies which come in plastic bottles too. Within Sikkim there are numerous companies in Sikkim who manufacture packaged bottled water which in fact generates employment and  contributes to the economy of the state. Banning of anything without any alternatives would prove to be a mistake? 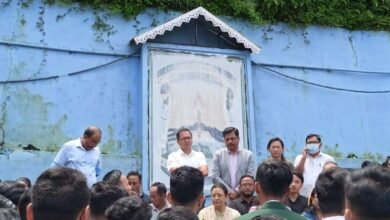 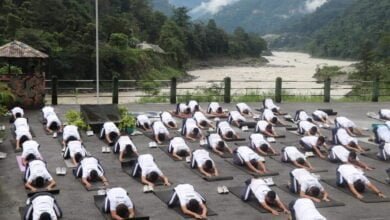