The purpose of this festival is to revive and re-establish the age-old tradition of the community’s culture conducive to rice-grain harvesting, generally known as ‘Dai’ in Nepali. This festival is organized by the Parengtar Nawlo Umanga Welfare Society in association with Muhaan, Backwoods Adventure Camp and Cafe Kalimpong. With time such traditions have faded, such that the ‘Kholey Dai Celebrations’ is an initiative to re-engage the community in activities which will reaffirm the values of culture of the hills as a whole.

This event is therefore an excellent opportunity for the visitors to participate and immerse themselves in our authentic village culture, while undeniably being a wonderful prospect for the residents of Parengtar to preserve their cultural essence.

This annual rice harvest ceremony in Parengtar celebrated with fervour. Rice is a mainstay of Himalayan cuisine and an integral part of the daily meals. At the Kholey Dai Festival, visitors are allowed to directly engage with the rural community and understand via participation the evolution of rice from the field to the plate.

Parengtar is a small village located at the Indo-Bhutan border in Patangodak Gram Panchayat under Gorubathan Block, Kalimpong, West Bengal. The village is easily distinguishable, situated in a unique location, on a plateau adorned by green paddy fields. Though Parengtar is still largely unknown, the village has a strong and ambitious community. The community is determined to bring Parengtar to the forefront as a clean model village with strong cultural roots. It is believed that the village came into being in the late 19th century by clearing a Pareng forest (a certain type of bamboo).

As a visitor, one will live with the villagers of this riverine settlement on the Indo-Bhutan border and get a glimpse into the daily life here. One’s stay will include an indulgent exploration of the traditional cuisine cooked with local ingredients. Besides enjoying performances of folk music and culture by artists from all over India, they will also be able to engage with Parengtar’s ancient art and craft forms for a holistic understanding of the village and its residents.

Daytime activities include swimming, fishing, local sightseeing, and hikes across Parengtar’s stunning landscape. Visitors can also participate in the local games passed down and preserved through generations. During the night, people huddle over a cozy bonfire to listen to folklore narrated by village elders. This zero-waste home-grown event is steeped in community participation, authenticity, and the culture of the village and its people.

In attempts to learn more about this festival and its cultural and environmental impact, Sikkim Chronicle spoke with Praveen Chettri, the Festival Director of Kholey Dai. Chettri is responsible for logistical planning, organization, and execution of the festival.

Speaking about what this festival is and explaining about the implications this fest brings, Chettri said, “Kholeydai festival has become a great platform to promote the mundane life of rural communities and farmers alongside showcasing the talents of folk artists. It has morphed into a unique way to promote authentic rural tourism. Kholeydai aims to bring into lime light the village of Parengtar and surrounding areas.
To become a definitive folk festival of Kalimpong is yet another objective, as Kalimpong doesn’t have any such calendar event that has an international appeal. It also creates sustainable livelihood opportunities for the associated villages.”

Answering to what lead to its conceptualisation, he said, “the strong community of Parengtar and beautiful paddy fields were the initial impetus that pushed us in this direction. After knowing about the old traditions related to Paddy harvest and the associated narrative it was felt as something important and became the guiding theme of the festival.”

“The festival is an attempt to revive the now fading traditions of paddy harvesting and related rituals, which is an integral part of the culture of this region. The festival also serves as a platform to showcase many rare folk cultures of the hills.” He added.

This year is the second edition of the festival and will be live from December 15 to December 18 2022. Talking about the first edition of the festival and how it spearheaded into a beautiful effort towards sustainability and conservation of culture and traditions Chettri informed, “Ist KholeyDai was a rare example of how a small village community came together to create a platform to showcase art, culture of a rural set up. The two-day festival was committed to zero waste by using organic materials and hand made products that were locally sourced.”

“This initiative was supported by many artists, entrepreneurs, and well-wishers. Many locals and domestic travellers from Assam, Maharashtra, Haryana, Kolkata, Darjeeling, Sikkim and Kalimpong attended the festival. To revive the tradition and culture, many dying folk arts like Dhan naach, Maruni, Tamang selo, Silli dance were presented by local groups from nearby villages like Todey, Kopis Fari and Kumai . The performance was a reminder of the significance that such arts hold in the everyday life of the local community.” He added

“The campsite of Kholey Dai needs a special mention owing to the serene location and the wonderful environment created by local entrepreneur Sumiran Allay . Many talented musicians like Bottle Rockets India, Deoashish Mothey , Nishant Gupta , Shreedhya and Biswajit Sewa gave captivating performances. The local community was engaged and it was their maiden attempt to open their homes to travellers who later became friends.” He further informed.

“It was a symbiotic interaction and has definitely brought the community and the village on the map of adventure seekers. The overarching themes of the festival was community engagement, sustainable tourism, reviving local traditions and empowerment of the youth. This has given the motivation to continue the festival every year with more vigour and involvement of like-minded individuals.” Chettri concluded. 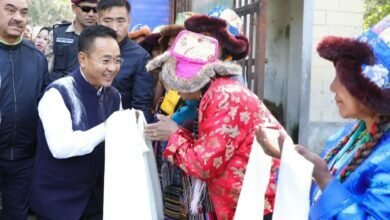