“Our deepest concerns are the degrading environment due to hydropower projects. The never-ending constructions of dams, pharmaceutical companies, and various factories on the river banks are a threat to our bountiful nature. It will endanger our flora and fauna” said Gyatso Lepcha while speaking to Sikkim Chronicle.

Gyatso Lepcha is the General Secretary of ‘ The Affected Citizens of Teesta (ACT) “. ACT was formed in early 2000 when the rivers of the Eastern Himalayas were going to be harnessed for hydroelectric power projects. Since then, the organization has been working for sustaining the ecological diversity and firmly defy the construction of dams over river Teesta. ACT holds a historic record of sitting on a hunger strike for 915 days when they feared off their native Dzongu to get submerged after the dam construction; as a result of which the State Government later called off the constructions of 4 dams.

Presently, the construction of two major dams namely 520 megawatt Teesta Stage Four Project of NHPC  over Teesta and 280 megawatts Panam Hydro Project over Dzongu’s native river ‘Rongyoung’  are underway for which the ACT is vehemently opposing.

While addressing a gathering in Namprikdang in Dzongu on October 05, Gyatso Lepcha expressed his dissatisfaction and opposition towards the construction of power projects. He said “SDF-led government in the past had declared Dzongu as Indigenous Lepcha habitat and home to distinct flora and fauna. Despite, being declared as such why is the State Government presently unable to understand its value and significance and tunneling the land. Eight-gram panchayats have rejected the proposal of constructing any dams and have sent a clear message of the indigenous populations of Dzongu standing against the projects. There has also been different news about the project bringing economic development to the area and its people but sadly it has been 13 years and more than anyone has ever received any compensation. We haven’t seen a single-family benefitting from the project”.

Gyatso Lepcha also highlighted various health issues arising amongst the people of Dzongu due to the construction of the dam. He stressed how the frequency of cloud bursts and landslides have increased in the area in a couple of years and how the alert warning has been issued by UN Climate Summit on the same.

“Sikkim is a fragile land and we must be really careful towards the alert warning issued in the UN Climate Summit” added Gyatso. Also speaking on the recent declaration of the state Government on making ‘ Katle Macha’ as the state fish, Gyatso related it to how important it is for Sikkim citizens to conserve and protect its habitat and the free-flowing river Teesta.

ACT for over the past 15 years has unitedly protested against the construction of dams leading to defiance. Despite this, the people of Dzongu called some frontiers to have compromised but they asserted to “No More Dams” or “ No More Dams in Dzongu”. They have been fighting for the last many years to declare the 11 Kilometres free-flowing Teesta stretch in Dzongu as a river sanctuary. The Lepchas of Dzongu in North Sikkim have been continuously protesting against the proposed mega hydropower projects and hundreds of people gathered at Namprikandang the confluence of river Teesta and Rongyong Chu in Dzong on October 05 to demonstrate their strong opposition against the two dams, both in Upper Dzongu.

Gyatso Lepcha asserts on the movement of not being a particular tribe-centric and rather appeals to stand together for the protection and conservation of the bountiful nature of Sikkim and its distinct ecology. 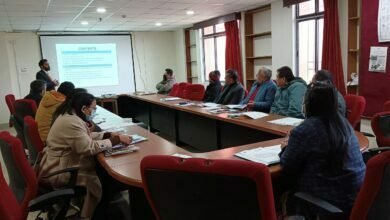