A two-kilometer-long road connection between Raj Bir Dara to Chayatal in Hee-Yangthang west Sikkim has been in demand since 1997 with no steps taken forward to fulfil that demand.

As per the villagers, the road was sanctioned numerous times but no action was taken despite the work order. Further, it was informed that the project was once more approved in the year 2019, after which the villagers have been hopefully waiting for the past few years with guileless hopes.

Mahesh Bista, a young resident of the hamlet who completed his engineering degree in 2016, now taking on the obligation to bring the road on his own, claimed that the issues caused by the lack of roadways were having a negative impact.

He decided to build a road after considering the department’s negligence and the suffering of the villagers. He claims that he utilized his personal savings for his village, to which other residents also made modest contributions of 1,000 and 5,000, rupees respectively.

While Sikkim Chronicle was out at the hamlet for a field trip to gather more intel on the issue, 96-year-old Harkamaya Bista asserted during the trip that the route had been in request since the Chogyal era. The patients had to be transported in a “doko” in the circumstance of a medical emergency, she further added.

According to Mahesh, anything may be finished wisely and on time if there is an unwavering amount of dedication. “The road will be completed with this formula in a month”, he added.

80 percent work has already been completed as gathered during the field visit as of January 16th.

The young and skilled machine operator, Laxuman Tamang, claims that the work is progressing properly and without obstacles because of the majority and support of the entire village.

Eventually, the villagers requested the government to kindly look into their plight and their efforts.

The villagers await concerned department’s response and continue to hope that the road would be approved.

The villagers also showered their sincere thankfulness to young Mahesh Bista for his steps for the good cause. 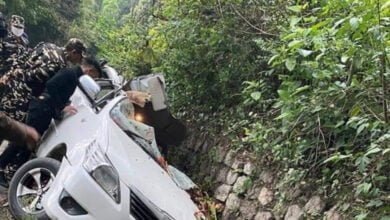