Former Sikkim cricketer Ajay Shrestha says he wants to come out of retirement for a chance to play for state team in the Ranji Trophy.

Sikkim Chronicle reached out to Shrestha who plays in the Kanchenjunga Shied, an A- League cricket league in the State, for Alpine Sporting Club. He says “I have played for Sikkim in Vijay Hazare Trophy in 2018-19 and in Syed Mushtaq Ali Trophy in 2020-21 but haven’t played in the Ranji, and I would love that, it is my dream.”

“At the time I felt like I was done. I regret that decision of retiring,” Shrestha told a local paper.

Shrestha says that he decided to come out of retirement because he is a left-arm-orthodox and he feels that he can fill the left-arm player’s requirement in the Sikkimese team. “A left arm bowler is a must in a team, every coach prefers at-least two left armed players in the squad, especially in Test Matches, and Sikkim has none, so that void can be my chance to give Ranji selections a shot.”

With confidence in his abilities and a mindset to get to elite levels of fitness, Shrestha has handed over all of his business to his wife so he can solely focus on training and getting fit and is heading to Hyderabad for training and will spend the next 3 months practicing at Hyderabad.

“My wife is very supportive and is handling my businesses so I can focus on practice,” he says. “I will go to practice at Hyderabad and train there so I can get fitter and also hone my skills.”

To the question that age and fitness poses, Shrestha answered by drawing parallels between Praveen Tambe, an acclaimed name and also a famed one, because of the movie “Kaun Praveen Tambe”, and also between his friend Abhishek Nandi who plays in elite Ranji teams, that age and body types don’t matter as long as there is fitness and confidence in one’s ability, one can always play in elite levels.

“As per age, Praveen Tambe made his Ranji debut at 41 and I think I can do so too, also when my friends tell me that I have developed a gut or am overweight, I give them an example of my friend Abhishek Nandi, who plays in elite Ranji teams, he is amazing but he is a big guy with a big gut, so that says that it is not about weight or age when it comes to this game.” Shrestha says.

With utter positivity and confidence in his abilities, Shrestha adds, “I have confidence in my abilities and work ethic, I am working to get to the state Ranji team, and though I can’t say with any guarantees but my sixth sense says that I will make it.”

Sharing a message to all sportspersons old or young, Shrestha says, “First of all you need to have confidence in your own abilities and every sports person’s dream is to play in the field, be it elite levels or Sunday leagues.”

“Age doesn’t matter as long as you have the heart to give it all in the field and the heart to work hard.” He concludes. 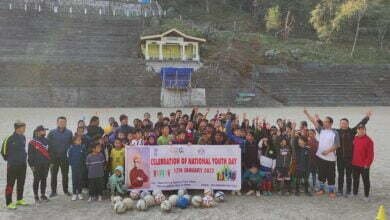