This drive is actually not regarding the enforcement of the newly implemented central motor vehicle act but the department aims to sensitize people in regard to various aspect of road safety.

So if we look at the total number of vehicles checked during the last two days it goes to 2158 vehicles were checked and verified and 160 are penalized.

The enforcement agency has been penalizing the road users with the new amended rate of fines that have been recently extended to the state of Sikkim.

It may be mentioned here that the Transport Department has recently implemented the new Central Motor Vehicles (Amendment) Act 2019 in Sikkim. It is implemented from December 4, last year.

The drive was launched simultaneously in all four districts of Sikkim with a total o 7 checking points in different places throughout the state, with Gangtok having one checking point on the first day and two in the second day,i.e on Tuesday, at Convoy Ground, Tadong and Zero Point Gangtok.

The Department has devised a proper checking system by incorporating e-Challan app powered by NIC in mobile phone, stickers are be issued to each vehicle once checked so same vehicle is not stopped again. Stickers will also be issued from Motor Vehicle Offices to those Vehicles who come and get their documents verified so that they don’t get stopped on the road except for doubt of overloading, drunken or drugged driving etc.

During the drive, the transport department also intends to check all government vehicles including that of the enforcement agencies. During the sensitization drive, people from all section of life are being educated and awareness is being spread. The Drive will end on March 31, 2020.

It may be mentioned here that the Ceasefire is not mandatory for Private Vehicles but it is mandatory for all Taxis and other transport vehicles as informed by the Secretary, Transport Department, Government of Sikkim. 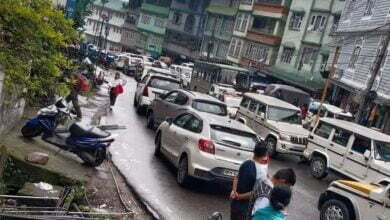