Pathing a village under the Namchi district has been in havoc due to major landslide since more than four months. More than 50 families are settled in the village, leaving in fear of losing their homes overnight. Apart from the landslide, the pathing village is well known for milk production. The said village generates gross of Rs 8 to 10 lakhs through milk production. However, due to the natural landslide, the milk production has been stuck.

The infamous “Pathing Landslide”, affecting more than 50 families led to major displacement, some has been shifted to nearby Pathing School, some took refuge at relatives’ homes and some with no means went on to find shelter at cowsheds.

The sole source of income that was enabling the villagers to put food on the table was milk production. As per residents, agriculture and milk-supply are its only sources of income, and that the village used to supply milk worth around Rs. 8 to10 lakh a month. However, because of displacement, the Pathing residents unable to produce milk, which is further making it hard for residents to meet their daily basic needs.

Minister for Land Revenue and Disaster Management, Kunga Nima Lepcha, talking about the slide and the affected residents, told, “The slide is a dry slide, and there is decayed or split rock at the top of the slide; that’s why we can’t mitigate the slide before a detailed study and survey.”

Speaking with Sikkim Chronicle, one of the residents said, “The landslide has affected our livelihood, before the landslide we were happy and working hard, but right now we don’t have farming lands or a shed for our cattle. We are hopeful that the government will provide us with farming land so that we can make our living through Agriculture and milk production.”

“Most of us don’t have government jobs, we used to produce milk and sell it to meet our daily needs, but due to landslides, we don’t have land to farm. We don’t have fodder to feed the cattle. There is no way we can go to the jungle for the fodder because the landslide is still active, and we don’t know when it will come and hit us. We really can’t take that risk, as we have families to feed,” said another resident.

After the landslide, on November 28, Chief Minister Prem Singh Tamang  visited the Pathing Village. During his visit, he provided the affected families financial aid and assured the 76 affected families that the government will acquire 10 acres of land to rehabilitate the displaced families.

According to the villagers, the landslide has occurred on and off for the past 29 years, but it has become more frequent in the last two years, and it has not stopped since this year’s monsoon.

During the monsoon season, landslides are prevalent in mountainous areas, but what caught people’s attention about the Pathing Landslide was that the landslide that the rains caused is still in its disastrous form even after the monsoon has passed.

The village that was providing for itself is currently talk of the state displacing more than 50 houses, slew livestock, and hindered the source of income that was enabling villagers to have got their necessities met. 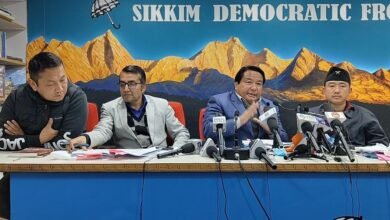