The First Supplementary Demands for Grants of Rs. 35,972.27 lakh was passed by the House to meet gross additional expenditure after it was moved for consideration and passed by Chief Minister P.S. Tamang, who is also the Minister-in-Charge of Finance Department, during the Financial Business of the session.

The concluding day of the Sixth Session (Part II) of the Tenth Assembly 2022-2023 of Sikkim Legislative Assembly today commenced with Question Hour.

In reply to the question put forth by MLA D.R. Thapa for the Finance Department, Government of Sikkim, Chief Minister P.S. Tamang, also the Finance Minister-in-Charge, shared that the total amount of borrowing by the State Government from May, 2019 to till date from different Banks, Financial Institutions and Government of India amounts to Rs. 4428.79 Crore (Rupees Four Thousand Four Hundred Twenty-Eight Crore and Seventy Nine Lacs). He further gave a detailed account of the borrowings utilised by the various agencies of the State government. The details of the schemes are reflected in the corresponding State Budget which has been placed in the Legislative Assembly, he added.

Replying to the question raised by MLAs, D.R. Thapa and N.K. Subba, for Social Welfare Department, Government of Sikkim, Minister-in-Charge, M.K. Sharma, said that the State Government has placed the request before the Union Government for the provision of seats to Limboo and Tamang communities in the State Assembly. He reiterated the State government’s commitment to resolving the long-pending demands related to the provision of LT seats in the State Assembly and the inclusion of 12 left-out communities in the Tribal category.

Chief Minister P.S. Tamang further clarified that committees have been constituted to pursue the ST status for 12 left-out communities and LT seats in the Sikkim Legislative Assembly.

In reply to the question raised by MLA D.R. Thapa for Home Department, Government of Sikkim, Chief Minister, also the Minister-in-Charge, refuted the statement that “The Chief Minister has distributed more than fifty-three vehicles to his supporters on a Government function”. He assured that no such expenditure has been incurred from the consolidated fund of the State for the purchase of the said vehicles.

In reply to the question put forth by MLA D.R. Thapa for Planning & Development Department, Government of Sikkim with regard to support extension to Tourism stakeholders of the State, Chief Minister P.S. Tamang, also the Minister-in-Charge, shared that various relief measures have been provided to the stakeholders in the Tourism sector including the provision of relief amounting to Rs. 4,53,35,000.00 to 9067 drivers @Rs 5000.00 through Transport Department.

He further informed that the State government introduced the State Bank of Sikkim (SBS) Motor Insurance loan to taxi drivers and owners as a relief for paying insurance premiums. The scheme was opened to all taxi drivers/owners and 974 beneficiaries availed the loan amounting to Rs. 256.56 lakhs. He added that the Skilled Youth Start-up Scheme has also been introduced through SBS to provide and generate employment for skilled youngsters of the State. The State Government also provided a rebate in terms of waiver of lease rent by lessees of the assets belonging to the Department of Tourism & Civil Aviation for which lease rent is less than Rs 15000/- per month, he added.

Replying to the query raised by MLA D.R. Thapa with regard to the steps taken by the State government to solve the unemployment problems in Sikkim, Hon’ble Chief Minister P.S. Tamang, also Minister-in-Charge of the Department of Personnel, informed that a total of 77,912 employment cards have been issued, out of which 7,793 cards have been cancelled on employment in the Government. A total of 34,097 persons have been engaged under temporary appointment in the Government sector. The employment card is not cancelled on securing a temporary appointment in Government and private sector.

He stated that the State government has decided to start a system wherein all vacancies for direct recruitment to Government jobs are taken up on annual basis. Further, the Skill Development Department has established a Niyukti Kendra, a one-stop convergence centre at Khadi Bhawan in Deorali, Gangtok for Training, Apprenticeship Placement, and Job Placement for the unemployed youth and also to organise various training programmes regularly.

The Chief Minister welcomed the suggestions put forth by D.R. Thapa and said that we must work in tandem to find a solution for addressing the issue of unemployment in the State.

During the Legislative Business, the 12 Bills introduced by the concerned Ministers-in-Charge in the last sitting of the House on 22 August were unanimously passed after elaborate discussions and the with the consensus of all the Legislators. The Bills are:

xii) Sikkim Allotment of House Sites and Construction of Building (Regulation and Control) (Amendment) Bill, 2022 (Bill No. 24 of 2022)

Subsequently, the House also passed the Sikkim Appropriation Bill, Bill No. 23 of 2022 for the First Supplementary Demands for Grants, relating to the Financial Year 2022-23 which was moved for consideration by Hon’ble Chief Minister P.S. Tamang, also the Minister-in-Charge of Finance Department.

i) Evaluation Report of Compliance to Provisions of the Sikkim FRBM Act: Fiscal Year 2019-20

This was followed by the Hon’ble Speaker, Arun Kr. Upreti, laying out the Annual Reports of various Commissions/Departments on the Table of the House.

In his valedictory remarks, Chief Minister P.S. Tamang extended gratitude to all the Legislators for their active participation in the discussion and welcomed the various suggestions put forth by them. He also thanked the former Speaker, L.B. Das, for gracefully conducting the Assembly sessions during his tenure and congratulated the present Speaker, Arun K. Upreti, for successfully running his first Assembly session. He also thanked all the representatives and officials of various departments, press & media fraternity, and maintenance staff for their support.

Hon’ble Speaker, Arun K. Upreti, expressed gratitude to all for maintaining excellent order and decorum in the House throughout the sessions. He further thanked the House members for keeping trust in him and assured that he will commit to the Chair of the Speaker and discharge his duties with utmost sincerity.

The valedictory remarks also had the participation of MLAs, D.R. Thapa, and Sonam Venchungpa.

The House was adjourned Sine Die. 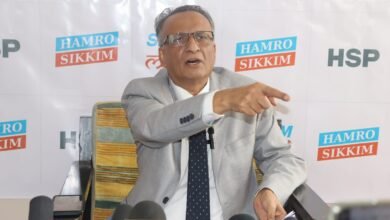 If the document was released by the SKM to attract Chettri-Bahun voters on the fake pretence then EC should cancel the election of all SKM MLAs: HSP