The lone stadium in the capital city Gangtok is undergoing a facelift after almost a decade.

The project which was estimated to be completed in three months is moving ahead in a slow place. However, due to hindrance owing to heavy rainfall and Covid guidelines, the work has been affected, the estimated budget for the upgradation is Rs. 4.98 crore.” said Director, Sports Department Doma Tshering. The work began when the state was reeling under the second wave of Covid 19.  “The stadium is expected to undergo a facelift other than the turf change, but it’s still in the planning phase. Under the Khelo India project, only the turf is getting changed at the moment,” added the Director.

The club owners in the state see is a positive effort by the Sports Department.

“The renovation is in progress at the right time as there are no tournaments or league underway currently due to Covid situation”, says Nima Thendup, Manager of Boys Football Club, one of the oldest clubs in the state. “The turf needed a facelift for a while, as most of the fielding area was ruined as it had become old. The players used to face injury during practice and tournaments due to the turf condition. It will definitely give better platform and practice area to our players post-renovation” he further asserts.

The renovation work started in February 2021. It is initially promised to be completed within a period of 3-4 months. As the state was struggling in fighting against the second wave of COVID-19, the stadium was declared as Covid -19 positive Centre to house the Covid positive patients from across the capital city. Besides, the entire state went under the second lockdown from April which further delayed the work. From July 12th onwards, the work resumed. However, this time heavy rainfall in the region hampered the continuity in work. According

The turf to be changed is procured from a company Tigerturf based in Newzealand. The process of changing the turf will involve laying silica gel as a first step, followed by rubber and the turf on the surface. The turf is being changed after almost a decade.

“The warranty provided by the manufacturer is of usually 8 years. However, it depends on the usage and maintenance as well,” shares officials involved in the renovation requesting anonymity. The first phase is complete, which involved laying silica cells. The project is expected to stretch for at least 2-3 months more. It can be concluded in three months if there is no natural or any other hindrance for the next few months,” he added.

The local players who represent the clubs opine that the facelift of Palzor Stadium was a need of the hour. The turf has been there for quite a long now. Sonam, a local player also says, “the turf was with almost no grass left. The injury was very common in all the players. After every game, players will be with bruises on the knees, back, or any part of the body. I appreciate the move of the government to finally change the turf, as it was a long pending demand. I myself had injuries while playing the game, of course, the bruise and cuts were minor but it would be difficult to play the next match with those injuries,  shares Sonam who has been playing football and different leagues and tournament in the stadium for the last few years.

Palzor stadium was approved as one of the Centres by the Ministry of sport to be upgraded to Khelo India Centre of Excellence (KISCE) last year. The Ministry had announced six centres in the different parts of the country to undergo up-gradation to Khelo India State Centre of Excellence and had sanctioned Rs.67.32 crore as financial support for four years. The upgradation announced by the Ministry aims to groom the talents for future Olympic games.

The state department of sports is investing more than 4 crores in the renovation of Palzor stadium, and the rest of the budget will be utilized in establishing an indoor gymnasium upcoming in Soreng West Sikkim.

The Palzor stadium, erstwhile known as Polo Ground, was converted into a full-fledged stadium and was inaugurated in 2011. Since then, the stadium has had many additional and facelift projects in the last decade. However, the department has taken an initiative to change the turf after a decade. The famous stadium named after erstwhile Prince has hosted many state level and national events, including Indian League.

By Tamana Tamang. The author is a freelance writer. She can be contacted at tamannatamang@gmail.com 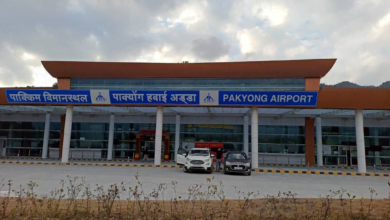