A golden state with a dark crises

Eleven members of a family were found hanging inside their house with their eyes blindfolded, ears plugged and hands and legs tied on July 1 2018 in Burari, Delhi. This abominable case called the “Burari deaths” still petrifies the nation to its core. A modern literate Indian family had committed suicide as a ritual, replicating the hanging roots of a banyan tree.

As unfathomable as it sounds, the Burari death case mirrors the suicide epidemic of the “Golden State” of India – Sikkim. A state known for its high literacy rate showcases the world to be a developed place. But the stirring hornet’s nest in Sikkim is oblivious to the world, paralleling the relatives and neighbours of the Chundawat family.

Suicide has created a furore in the urban as well as rural area of Sikkim. This year in the month of June alone, 46 suicide cases and 18 SADA cases was reported. Not every suicide case is investigated by the police, instead they are just listed under the unnatural death index following other sombre suicide cases. Sikkim being a literate state Why are the people committing suicide? Has system failed the people?

According to The National Crime Records Bureau, 2015 the entire mental health workforce, comprising clinical psychiatrists, psychologists, psychiatric social workers and psychiatric nurses, stands at 7,000, while the actual requirement is around 55,000. The obvious undertone to this figure is that mental health professionals are not proportionally divided among different states in the country. Sikkim is one such state which might fall under the category of having a limited number of mental health professionals for care.

SOCIETAL VALIDATIONS AND STANDARDS SET BY THE SOCIETY

The “don’t let it out of the family” trope is prevalent in all Indian families and Sikkim is no stranger to it. This barbaric saying has taken lives of many individuals in the society.

The Indian patriarchal society entertains domestic violence, sexual abuse and silencing of the female voices which leads to mental illness. The victim here is not only the mother of the house but also the adulting children who suppress such deplorable episodes leaving them traumatised for life. This begins another wind among the society, “Depression runs through their family.”

During the Covid pandemic, many families lost their lives because of not treating it. Many did not take a test on a pretext of a normal flu. The act of not taking precautions and turning a blind eye to their condition observed a certain sort of fear instilled in the people. Fear of being diagnosed with peculiar or unfamiliar problems that would cost them their place in the society.

The fear of cancel culture came off as more intimidating to some than their lives. Pawan ( name changed), a 78 year old man was down with fever for a certain span of time. His son and other members of the family did not take him to check with the doctor despite their relatives’ and neighbours’ advice. Pawan’s family is still adamant that he died of stroke and not Covid, but the report says otherwise.

Covid has become a normalised outbreak and people are aware it can be cured. The suicide epidemic in Sikkim is acknowledged by the people but mental illness and depression is still considered a taboo in the State. The people of Sikkim from rural and urban section should be educated about mental health and the stigma around it should be teared down completely. Acknowledging mental health problems should be normalised and discussed in the society. If people from the Sikkim choose to turn a blind eye to this aggravating issue, it is highly unlikely that the recrudescence of an epidemic will be cured.

As of 2021, significantly more men than women have died from drugs and by suicide. Toxic masculinity is an insular concept that sets an ideal standard for men to be considered a “man”. How the people have normalised young boys indulging in substance abuse is also a contributing factor that leads to such glaring suicide index.

The most straightforward trope in the hill stations – “Girls don’t look good smoking in public”, “keti bhayera”(being a girl), adds in more toxicity to toxic masculinity in Sikkim. This encourages young boys to dive into drugs, because according to the gender ground rules set by the society – “Cigarettes, alcohol and drugs are for men not women.” Middle aged men coming from remote areas are more prone to committing suicide. Further investigation of such cases are not carried out but the explanation behind it is perceptible.

According to Kunal Kishore, a United Nations Office on Drugs and Crime (UNODC) official, “The high expectations and vulnerabilities of those born after the state’s merger with India in 1975 have resulted in them turning to drugs and suicide.”

As India followed the footsteps of the West in the name of modernisation and with Sikkim merger with Union of India (1975), Sikkim had become one of the Northeast places of India that was heavily influenced by the western culture.

The gradual change of social structure within the community was conspicuous, but it came with its repercussions. Modernisation introduced exotic culture and the people of hills were quick to learn. From Rock ’n’ Roll music to the western media influx, people were heavily influenced by it.

If you observe the Northeast places of India and the mainlands’ culture, you’ll be comparing apples with oranges. The reason as to why these places have stark differences might be because of topography of the region, a sense of rebellion, or perhaps, defiance from the rest of the country. Sikkim has always been closely tied with Darjeeling traditionally and culturally as well.

The rebellion period of the the merger of Sikkim with India (1975) and the agitation in Darjeeling (1986) took a toll on the youths. The youths hailing from these places were jamming to the rock ’n’ roll beats of the West which was was a social barometer to the civil rights movement.

Sikkim has always been struggling with alcohol and drug abuse since the 1980s and the drug crisis worsened leading up to the early 2000s. Sikkim Anti-Drugs Act, 2006, (SADA) was enacted to deal with increasing abuse of medicinal preparations but it did not provide imprisonment for illicit drug use, rather a fine of Rs 10,000, later increased to Rs 50,000 was charged as penalty.

According to a report by Livemint, 7 out of 10 teenagers in Gangtok abuse pharmaceutical products. Likewise, liquor utilisation and deals have flooded. From 2013 to 2014, the income gathered from liquor deals added up to an incredible measure of Rs 120.64 crores. Because of an absence of guidelines on pirating and liquor utilisation and deals, substance misuse has developed dramatically. Concentrates on show that substance misuse is connected to higher self destruction rates.

Unsur­pris­ing­ly, men­tal wellbeing con­cerns have climbed dur­ing the pan­dem­ic. Across the world, paces of depres­sion and anx­i­ety rose by over 25% in 2020, accord­ing to explore pub­lished in the Lancet.

The new “woke” and “cool” generation is said to be the most depressed generation of the epoch. Social media plays a huge part in issue. A feeling of dread toward miss­ing out, and disgrace in missing the mark regarding a web-based entertainment wor­thy standard has affected the netizens in all possible manner.

Materialistic wants and a heterogeneous beauty of standard being two of the most glaring downsides of platforms like Instagram. A 14 year old boy committing suicide at Tahangchen, Gangtok after getting 50 Rs instead of Rs 500 to treat his kins on his birthday is an epitome of the mental space the new generation is at.

Tashi (changed name), a 24 year old man coming from a well to do family of Gangtok committed suicide in 2022, after parting ways with his girlfriend. The 24 year old was incapable of enjoying life any further, and according to his peers he was in depression for quite a while. Heart wrenching stories like Tashi’s has become a household story that spreads in the neighbourhood of Gangtok throughout the year.

The growing suicide toll due to love failure with their partners is flabbergasting in Sikkim. From one of the bonafide musicians of Sikkim, Rahul Rai (Tribal Rain) to the teens living next door have put an end to their lives after losing their loved ones and not being able to cope with their love gone sour.

The ‘bhanai’ singer Rahul Rai committed suicide a year after releasing their hit album, “Roka Yo Samay” . The album is a medley of alluring tunes with visceral lyrics that instils a sense of melancholia. It is about love songs, break ups and giving up on life for a certain somebody. The whole album made sense after his suicide news broke out.

A dark shadow hangs over the long sunlit times on Sikkim. The people of the State has many miles to cover to tackle mental health issues and the suicide epidemic. From suicide cases due to unemployment issues to domestic violence, Sikkim is losing many souls coming from different backgrounds and age groups. Suicide should not be a panacea for disruption of mental health and people should know that help will always be found in the Golden State of India.

By Rhea Chhetri. The writer is a student of Mass Communication at Amity University, Noida. She can be contacted at [email protected] 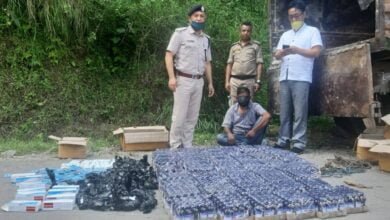 “Rather ten times, die in the surf, heralding the way to a new world, than stand idly on the shore”